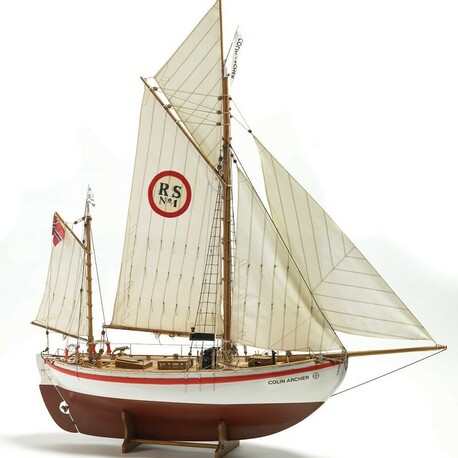 A thoroughly elaborated RC model of a Norwegian lifeboat from 1893 with a 1270 mm wooden boarding hull, a Danish company called Billing Boats. Kit in scatter on scale 1:15.

In the early 1950s, the Danish architect and former RAF war pilot Ejnar Billing exhibited a self-made model of a fishing boat in the hobby shop of his wife. After the photos of the model appeared in one magazine, Mr. Billing paid orders to put up tens of pieces of the same model. Because it was not enough to handle it, it occurred to him that he would offer the boat as a kit - the first mass-produced kit with a wooden skeleton with a keel, ribs and a plank that imitates as much as possible the construction of real ships. This method of construction quickly took hold and Mr Billing's models began to conquer the world. In 1958 a family company was established, bearing the name of Billing Boats. Throughout the years, the design of the models has been improved and modernized, the use of plastic moldings was introduced in the 1960s, then CNC machines began and at the turn of the 1980s and 1990s Billing Boats began to use laser cutting of parts. Today, the company has been managing the third generation of Billing, and floating RC models and non-floating desk mock-ups are still the top leaders in ship modeling.

We are pleased to offer you a series of Billing Boats, from which you can build beautiful detailed sophisticated floating mock-ups with remote controls or create a stylish complement to the interior of your flat with a salty sea scent and calling for a ...

Colin Archer RS1's Norwegian lifeguard was built in 1893 for the "Norwegian Ship Rescue Society" at Rekkevig Shipyard near Larvik. The name was borne by the designer and builder of Colin Archer, and it was built on 30 ships of this type, which for years had been doing great work in stormy waters along the Norwegian coast. The originally pure saucer coin Colin Archer, after 40 years of rescue service, was given a helper engine and the new owner with him crossed the Atlantic to the United States." In 1954, he was damaged in a severe storm in North Carolina, and when Norwegian enthusiasts discovered him on the Potomac River in 1960, it was just a wreck. The following year, Colin took aboard a freighter to Norway, where he eventually replaced several owners. In 1972 he was dedicated to the Norwegian Naval Museum in Oslo; since 1973, he is the "Colin Archer Club", which has made it operational and participates in the regat of historic vessels in northern Europe. The 1:15 scale kit is designed for advanced shipbuilder.

Colin Archer has a fuselage of classical wooden construction with a plank, wooden deck and superstructure. The kit contains all the plastic, metal and wooden parts needed to complete the model, maker accessories (eg positional lights, anchors, rescue rings, etc.), a ship shaft with a housing and a 35 mm ship screw.

You can build the model as a non-floating model such as a pure motorless sailless model and controlling it, or as a "full-blooded" float model with a rinse and its control - in this case, you will need about 6 kg of ballast.

To master the basic functions of a purely engine model, the most common two-channel RC kit is basically the same; The powerful standard servo will satisfy the rudder control. For "sailplane", the boat design counts using three sail servo winches that you can control independently or through suitable mixes - as you wish, and allow your RC set. Due to the large number of powerful servos, do not forget to provide sufficient power supply - the linear BEC stabilizer in the normal 30-40 A speed controllers will not suffice." For the right maker, of course, it is "duty" to add as many macros as possible (lights, audio module, etc.), which will require the use of a multichannel RC kit - and the channels are never enough.