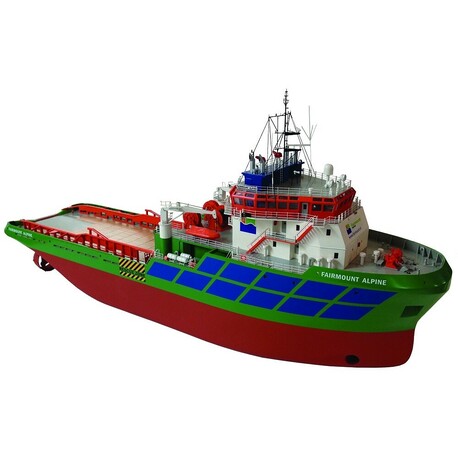 Detailed RC model of an ocean tug / rescue boat with a wooden plank hull with a length of 1000 mm from the Danish company Billing Boats. 1:75 scale building blocks in bulk.

Fairmount Alpine's oceanic tug / salvage vessel equipped with a wide range of special equipment for the extolling of sunken ships, transport ships and other extreme costs on the partially submerged trestle. Kit in 1:75 scale is intended for advanced ship builders.

Fairmount Alpine has a hull of a classic wooden structure with a combined šarpiovou (from plywood sheets) and picket hull, wooden deck and superstructure. The kit includes all the plastic and wooden parts needed to complete the model, dummy accessories (eg. Position lights, anchors, lifebuoys etc.), marine shaft housings and propellers.

To drive the model includes two DC motors range from 500 to 600, at least 30 A bidirectional controllers (depending on engine) and 6-7 with articulated 2-3S NiMH or LiPo battery with a capacity of 3 to 5000 mAh. Of course you can supplement a functional cross-maneuver the unit into the bow.

For basic operation, in principle, sufficient even the most ordinary two-channel radio system; to control the rudder servo meet the current standard. But for right maketáře of course, is "duty" adding as much maketových functions (lights, sound module, water cannon, maneuvering unit etc.), which will require the use of multi-channel RC system - and the channel is never enough.