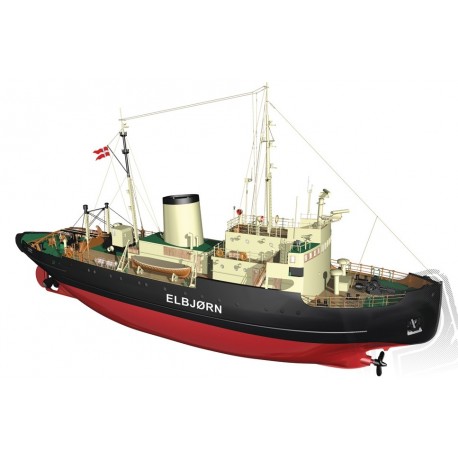 Detailed RC model of a Danish icebreaker with a length of 690 mm with a plastic fuselage of the Danish company Billing Boats. 1:75 scale building blocks in bulk.

Icebreaker Elbjorn cared about breaking ice in Danish waters from 1954 to 1996, when an explosion caused damage dynamo, whose removal would be too costly. But fortunately, the ship ended up in scrap, after conversion into a floating museum / restaurant, it can now visit the Danish port of Aalborg. Kit in 1:75 scale is designed for moderately advanced ship builder. < / I>

To drive the model includes two DC motors range from 500 to 600, at least 30 A bidirectional controllers (depending on engine) and two 6-7 articulated 2-3S LiPo or NiMH batteries with a capacity of 3 to 5000 mAh.

For basic operation, in principle, sufficient even the most ordinary two-channel radio system; to control the rudder servo meet the current standard. But for right maketáře of course, is "duty" adding as much maketových functions (lights, sound module, etc.), which will require the use of multi-channel RC system - and the channel is never enough.