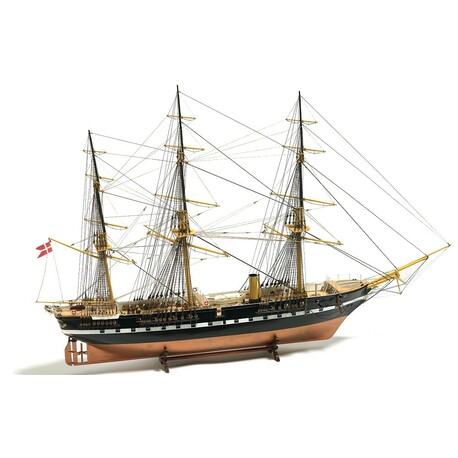 Steam screw frigate Jylland with 44 cannons was the last warship built out of wood for the Danish navy. Her steam engine with an output of 400 HP it gave to its time respectable speed of 12 knots. For a cruise under sail to be able to pick up the propeller shaft in the hull, so their resistance impeding boat. Jylland attended the final battle, in which the opposite was entirely wooden warships: May 9, 1864, during the Second War of Schleswig at the island of Helgoland clashed Danish squadron formed Jylland, another screw frigate Niels Juel and screw corvette Hejmdal Austro-Prussian squadron including two Austrian frigates screw Schwarzemberg (flagship of Admiral Tegetthoff) and Radetzky and slow three Prussian gunboats which to fight but practically did not intervene. After the initial maneuvering Niels Juel embarked artillery duel with Schwarzembergem and Jylland with Hejmdalem deadly exchange greetings with Radetzky. In the fight Jylland suffered considerable damage, while the fire on Schwarzembergu forced the Austro-Prussian squadron abort the struggle and break free. Although the battle resulted in a tactical victory for the Danish, the preponderance of Prussia and Austria on land at sea was not compromised and the war ended with a defeat of Denmark, which lost territories of Schleswig. At the end of the 19th century, the ship was removed from active service and then fell into disrepair for many years in various ports. Finally, 1984 was towed into dry dock after overhaul turned into a museum ship located in the Danish town of Ebeltoft. As a result, everyone can enjoy the beauty of this ship, which belong to the Czech (albeit under the Austrian flag) maritime history. Jylland is designed for advanced boat builders; It is designed as a non-floating table mockup.

Jylland has classic wooden hull structure made of laser-carved parts of the hull planking and a wooden deck. Kit includes all wooden, plastic and metal parts needed to complete the model, dummy accessories, sails etc.