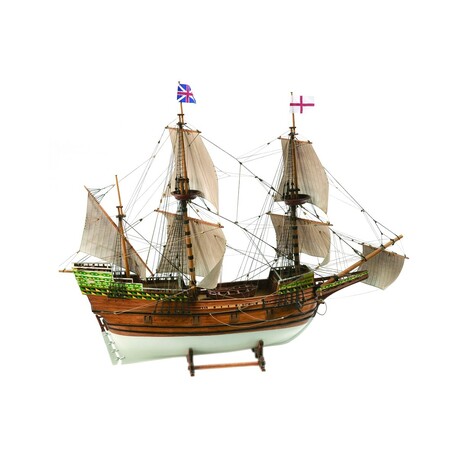 A sophisticated, non-floating mock-up of a 17th-century English ship with a 650 mm wooden sleeping hull, Danish Billing Boats. Kit in scrap in scale 1:60 for experienced builders.

English cargo ship Mayflower running water most likely in Harwich in the early 17th century was not large - in length measured 95 feet, and its displacement was only 180 tons. In history indelibly its voyage to North America in 1620. August 15, 1620 Mayflower lifted anchor in the English Plymouth and headed for the coast of northern Virginia with 102 settlers and about 30 men crew on board. After a journey of a 3000 miles and lasting 67 days, the ship docked at Cape Cod (Cape Cod). Due to unfavorable winds and relentless storms ship failed to penetrate the originally intended location on the coast. The hardships of the voyage and the ship's disease have reduced by half; Finally, after several weeks holding the remaining 53 settlers landed and founded the settlement of New Plymouth in a new country, which later became the United States. In the years 1955-6 was in the British Brixhamu Devon built replica of the ship using original materials and technologies called the Mayflower II, who later crossed the ocean in 1957 and remained permanently in the US in Plymouth, Massachusetts as a gift to the American people in commemorating the alliance II . World War. Mayflower is intended for advanced boat builders; It is designed as a non-floating table mockup.

Mayflower has a classic wooden hull structure made of laser-carved parts of the hull planking and deck and superstructure. Kit includes all wooden, plastic and metal parts needed to complete the model, dummy accessories, sails etc.