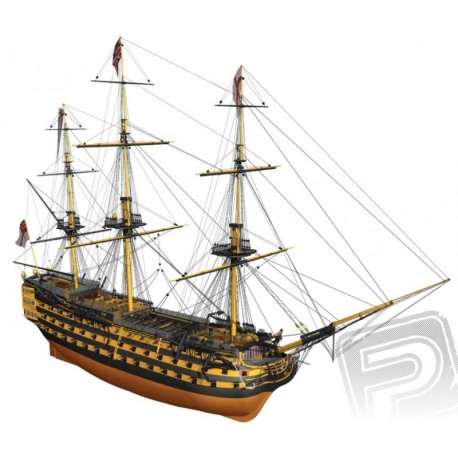 An elaborate non-floating model of Admiral Nelson's terraced ship from the Battle of Trafalgar from the 18th century with a 1340 mm long wooden plank hull by the Danish company Billing Boats. 1:75 scale bulk kit for experienced builders.

HMS Victory, perhaps - at least for the British - the most famous warship of all time. 226 ft long ship wore 104 works that served most of the 850-member crew, the construction of the wood consumed the equivalent of approximately 40 hectares of forest. The water was launched in 1765, even with Latin sail on the rear mast and bowsprit Blind for war service was fully equipped and reproduced in 1778th We were continually modernized and fitted with jigger, orcas and foragers. Since its inception participated in a series of battles with the French fleet in the War of American Independence and then in the Napoleonic wars. He became a legend October 21, 1805 at the Battle of Trafalgar, which was the flagship of Admiral Nelson, who also killed her. But he lived long enough to know that's a bold maneuver to upset the battle lines combined Franco-Spanish fleet and precise and rapid gunfire British ships to ensure victory. HMS Victory remained in regular service in 1812. As a national monument has been respectfully restored and now you can visit in a dry dock no. 2 South-England Maritime Museum in Portsmouth, close to the moorings of modern frigates, destroyers and aircraft carriers of the Royal Navy. Victory is for advanced boat builders; It is designed as a non-floating table mockup.

Victory has a classic wooden hull structure made of laser-carved parts of the hull planking and a wooden deck. Kit includes all wooden, plastic and metal parts needed to complete the model, dummy accessories, sails etc.