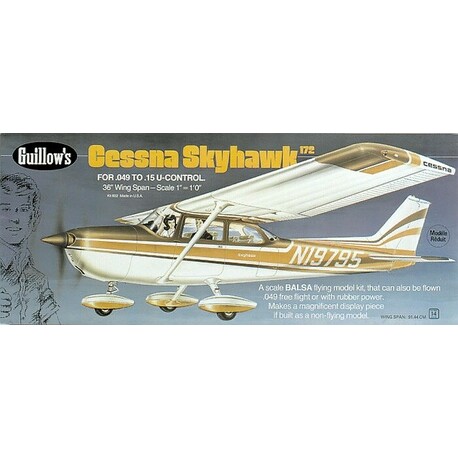 Model of an American sports aircraft with a rubber drive or a tethered model with a 1-1.5 cc engine. Die-cut parts, propellers, rubber harness and cover. material. Span 802 mm. Suitable for conversion

When in 1956 diverged production of a new version of an older four-Cessna 170 differing three-wheel nose landing gear, surely even the greatest optimists anticipate that it will be a machine that will last in production until today and become the best-selling single-engine airplane of all time - they were built more than 43,000 pieces!

In addition to the relentless and unobtrusive service both civil and military users worldwide Cessna 172 distinguished establishment incredible endurance record. December 4, 1958 soared Cesnna N9172B piloted by Robert Timm and John Cook from McCarran Airfield near Las Vegas. After 64 days, 22 hours, 19 minutes and 5 seconds, 4 February 1959 again landed. Fuel, oil, food and water were transferred aboard a flight from trucks traveling on a long straight section of desert road at the same speed as the Cessna flying above him. The record attempt was terminated to when the engine is constantly running well past the usual time between overhauls and his performance dropped so much that had not managed to climb.

Designers freely flying mock four-tourist high wing aircraft designed for propulsion by rubber; instructions and schedule allow you to build a model as well as a free flight with a powered combustion engine 0,8ccm, the captive model with combustion engine 0,8-1ccm or as a static model with sophisticated details maketovými in museum quality at a scale of 1:16.

The model is a classic balsa structure in Rozsyp with předseknutými wooden parts, scale accessories made of vacuum-molded plastic, plastic injection molding parts drawn by a předseknutými parts of "plastic plywood", a light and strong material replacing conventional plywood. The hull is constructed of course true minimaketářskou technology partitions a plurality of longitudinal enabling faithfully reproduce the rounded shapes. Built in two stages - thanks to "split" in the vertical plane stand directly on the countertop first half of the fuselage, and then to her "dolepíte" second half. This ensures that even complicated shapes hull stand straight and symmetrical, without needing any special preparations. Since it is a small model for advanced builders, you should already have prior experience with classical building and test-flying models powered by rubber.

Skyhawk is also suitable for conversion to a RC model with electric drive - although this construction plan variantuu offer for experienced modeller would not be a big problem.

Treatment of rubber harness: The new rubber carefully wash it in soapy water and allow to dry. Then, lubricate it with castor oil (sold in pharmacies) or silicone grease to lubricate fishing lines (available in most stores fishing equipment). After flying harness with the model, remove and store it in a sealed plastic bag. Lubricated rubber volume unfolds smoothly and with less friction - provides more power and last longer. The new bundle is also advisable to first fetch - for the first 2-3 years to film only 80-100 rpm, only then can safely shoot more.