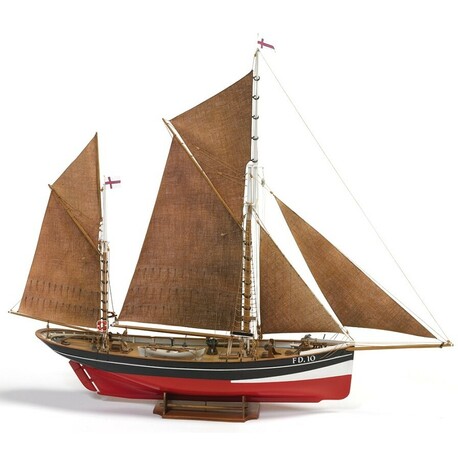 A detailed non-floating model of a Danish fishing sailboat from 1930 with a wooden planked hull of 700 mm length by the Danish company Billing Boats. Loose construction kit in 1:50 scale for slightly advanced builders.

Sailboats type yawl have their origins in England, but were also very popular in the waters around the Faroe Islands, Iceland and Norway. Yawl FD 10 with a displacement of 63.5 tons was built in 1930 in the Danish shipyard Nyborg. Shortly after it was sold to the Faroe Islands, which sailed under the name Sjostjornan TG II. During the next 20 years he held a number of owners and names, until it was sold in 1950 to Iceland and renamed Arnanes. FD 10 is designed for intermediate boat builders; It is designed as a non-floating table mockup.

FD 10 has a hull of a classic wooden structure made of laser-carved parts of the hull planking and a wooden deck. Kit includes all wooden and plastic parts needed to complete the model, dummy accessories, sails etc.