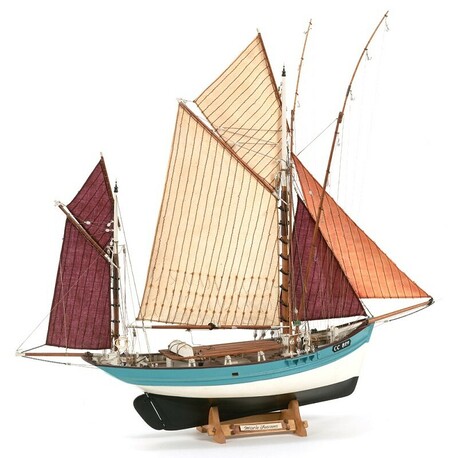 Tuna is a demanding job that requires a very strong and fast craft with excellent nautical properties. SAIL type top end of the 19th century was "Dundee" vessels of 50 to 60 tons with a massive sails and a crew of 12 men. Tuna might catch on pole - the ship was equipped with 20-meter-long rods "Tangon" which is in the hunt sklápěly over the hips. Each Tangon usually carried seven lines, of two other rods were tied to the stern and a third, very long, to the top of the main mast. Marie Jeanne is intended for intermediate boat builders; It is designed as a non-floating table mockup.

Marie Jeanne has classic wooden hull structure made of laser-carved parts of the hull planking and a wooden deck. Kit includes all wooden and plastic parts needed to complete the model, dummy accessories, sails etc.