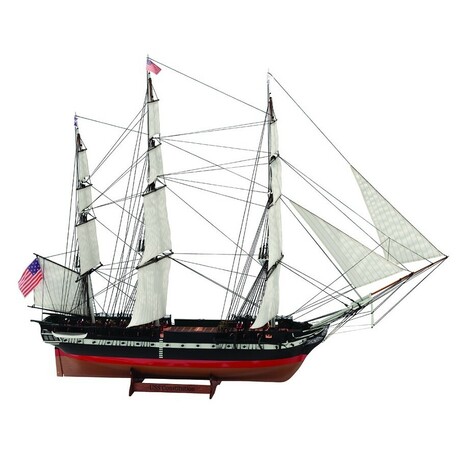 A detailed, non-floating model of a large American frigate from the end of the 18th century with a wooden plank hull with a length of 910 mm from the Danish company Billing Boats. Kit in bulk in 1: 100 scale for experienced builders.

USS Constitution is one of the six large frigates built under the Maritime Act of 1794, which was founded by the navy of the United States. Was launched in 1797 and officially named in honor of the US Constitution by President George Washington. Compared to conventional frigates his times were noticeably bigger and stronger ship armed with cannons 50-54 - coped Although British and French ships 70-100 ordinary guns, but all other warships smoothly overcome. This was demonstrated dramatically in the US-British war 1812-1815, when the Constitution and its sister vessel initially effectively attacked British merchant shipping. Constitution seized quantities of cargo ships and destroyed or captured five British warships, including two frigates with 38 and 40 cannons. But once victory over Napoleon allowed the British to send a strong squadron of ships of the line to blockade the American coast, Constitution and its sister ship, has dared to leave. Constitution later served as the flagship of the American squadron protecting merchant shipping in the Mediterranean from pirates on the Barbary Coast (present-day Algeria and Tunisia). In 1840 he circumnavigated the world and served as a training ship of the Naval Academy. For active service was scrapped in 1881, then worked as an accommodation vessel for naval cadets until 1907, became a museum ship. Since then, here and there, sail the sea - must be between the years 1931 -34 visited on a cruise of 90 ports on the coast of the United States, under their own sails sailed in 1997 to celebrate its 200th birthday in 2012 during the celebration of 200 years since the victory over a 38-gun frigate HMS Guerriere. USS Constitution remains the oldest sailing capable warship world. Normally docked at the pier no. 1 of the former naval shipyard in Charlestown, is currently undergoing an extensive overhaul. USS Constitution is designed for advanced boat builders; It is designed as a non-floating table mockup.

USS Constitution has a hull of a classic wooden structure made of laser-carved parts of the hull planking and a wooden deck. Kit includes all wooden, plastic and metal parts needed to complete the model, dummy accessories, sails etc.