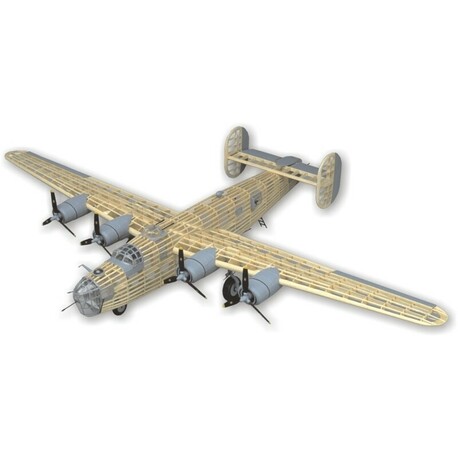 Consolidated B-24 Liberator was at the beginning of II. World War II that purpose as a B-17 Flying Fortress - as a long day bomber, who does not need an escort fighters. Compared to the older B-17 was somewhat more advanced aerodynamic wing thanks to a large slenderness with a modern profile, he also used the nose landing gear (nose leg of a downed Liberator postoužila even as a model for the German jet fighter Me-262 Schwalbe). In "collision with reality," in light of the heavy losses, which brought such. Raid at the treetops at refineries and oil fields in Romania's Ploiesti, but pointed to the need numerous treatments, like the B-17. Liberators are then proved not only as bombers (eg. In our Pardubice hundred Liberators from Italian bases leveled a local refinery, including the adjacent station, refinery and legendary Hotel Veselka), but also as a remote reconnaissance machines with bomb bay filled batteries, cameras, and especially as an extremely effective anti-submarine aircraft. Just such Liberators are inextricably linked with the histories of the 311th Czechoslovak Bomber Squadron. In addition to several submarines was the most valuable catch 'our' Liberator German blockade breaker Alsterufer, fast transport ship carrying a cargo of the Empire of Japan into tungsten, which would suffice for an annual steel production for the German "Panzer". December 27, 1943, 500 miles northwest of Cape Finisterre, to attack the ship hiding under low clouds and bristling with anti-aircraft guns fell Liberator crewed P / O Oldrich Dolezal. Following the intervention of two mA bombs and several rocket ship he engulfed uncontrollable fire and began to slowly but inexorably sinking ...

The model is a classic balsa structure in Rozsyp with předseknutými wooden parts, scale accessories made of vacuum-molded plastic parts and plastic drawn by injection molding. The hull is constructed of course true minimaketářskou technology partitions a plurality of longitudinal enabling faithfully reproduce the rounded shapes. Built in two stages - thanks to "split" in the vertical plane stand directly on the countertop first half of the fuselage, and then to her "dolepíte" second half. This ensures that even complicated shapes hull stand straight and symmetrical, without needing any special preparations. The wing is being built from classic ribs and beams. Given that it is a model for advanced builders, you should already have prior experience with classical building.