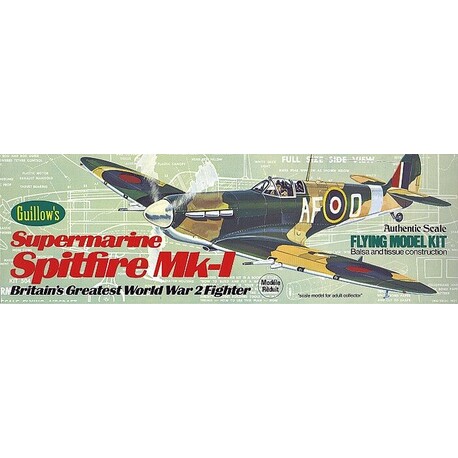 Supermarine Spitfire is undoubtedly the most famous British fighter II. World War. Its origins can be traced back in the 20's, when its designer Sir Reginald Mitchell built the expressway float planes that won three consecutive famous Schneider Trophy. Spitfire, continuous improvement and fueled by ever more powerful engines, fought from the first days of the war until its end. In Seafire version with folding wingtips and landing hook and got aboard aircraft carriers; Spitfires Mk.IX returned home three Czechoslovak squadrons serving in the RAF ...

Designers freely flying semiscales British fighter aircraft designed for propulsion by rubber. The model is simple but classic balsa structure in Rozsyp with předseknutými wooden parts, scale accessories made of vacuum-molded plastic parts and plastic drawn by injection molding. The hull is constructed right minimaketářskou technology with dividers and plenty of stringers, which allow to faithfully reproduce the rounded shapes of modern machines. Built in two stages - thanks to "split" in the vertical plane stand directly on the countertop first half of the fuselage, and then to her "dolepíte" second half. This ensures that even complicated shapes hull stand straight and symmetrical, without needing any special preparations. Given that it is a very small - even relatively simple - a model, you should already have prior experience with classical building and test-flying models powered by rubber.

Spitfire is also suitable for conversion to a miniature RC model with electric drive - although the construction plan of variants of this offer, for an experienced modeller, and the pilot would not be a big problem. For example, you can try to use the drive unit, and cabin electronics from our Mini Bee.

Treatment of rubber harness: The new rubber carefully wash it in soapy water and allow to dry. Then, lubricate it with castor oil (sold in pharmacies) or silicone grease to lubricate fishing lines (available in most stores fishing equipment). After flying harness with the model, remove and store it in a sealed plastic bag. Lubricated rubber volume unfolds smoothly and with less friction - provides more power and last longer. The new bundle is also advisable to first fetch - for the first 2-3 years to film only 80-100 rpm, only then can safely shoot more.