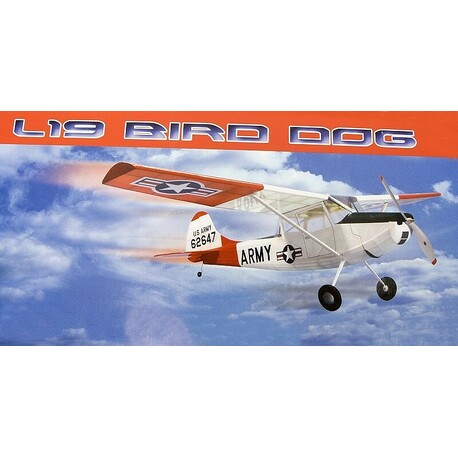 Light reconnaissance and connecting Cessna L-19 (since 1962 O-1) Bird Dog earned undying fame and great reputation throughout his long service. Especially Bird Dogy famous during the Korean and Vietnam Wars. For saving the life they owed hundreds of downed pilots, to which small and inconspicuous Cessna guided rescue helicopters. And without Cessen in the role of forward air controllers branding goals in the Vietnamese jungle if they were American supersonic fighter-bombers completely "blind".

The Cessna Bird Dog is also connected to one particular and instructive tale: the day before the fall of Saigon, South Vietnamese Air Force Major had done in his two-seater Cessna wife and five children, and flew away over the sea. When he appeared on the horizon Midway aircraft carrier flight deck crowded with army helicopters evacuated, it remained barely had fuel per flight hour. He circled the boat and dropped a message requesting the release of the deck for landing. Commander, Rear Admiral Chambers, let into the sea overthrow helicopters worth $ 10 million and Major Bung-Ly landed safely. His Cessna is today exhibited in the Museum of Naval Aviation in Pensacola.

Designers of American companies DUMAS Aircraft is the ideal machine for modelers who already has at least basic experience in building small models powered by rubber or piloting gliders and RC model controlled rudder and elevator. You will improve in the building "žbrdličkové" skeleton of the fuselage and wings, paper coating and painting - it's due to highly preprocessed laser-carved works like clockwork.

RC kit semiscales American reconnaissance and connecting high wing aircraft designed for electric propulsion. The model is simple but classic balsa structure in Rozsyp with laser carved wooden parts, scale accessories made of vacuum-molded plastic parts drawn by plastic injection molding and metal. The hull is constructed of conventional technologies minimaketářskou sides of balsa wood glued beams that connect polopřepážkami and bars in the lattice frame. The resulting shapes get stuck after several additional stringers. The wing is a classic design from the spars and ribs, tail out of balsa wood strips and laser-carved parts. Minor "tweaks" is making the peripheral parts of the tail and end arches wings of balsa wood strips laminated wet. You get so easily surprisingly strong and lightweight parts - without the use of carbon! Drawings necessary templates again refer to the instructions. The whole model can drag the paper supplied in the kit or a suitable lightweight iron sheets with little shrinkage, such as Airspan or Litespan.

Bird Dog is designed to drive a small DC motor with gear - e.g. powertrain GWS which is marked on the plan. Nowadays probably choose small AC motor - in this case you will have to redesign the motor mount (insert new motor mount from 2 mm birch plywood), but it should not pose a serious problem. For relaxed flying just class motor AXI 2208 and Li-poly two cells of 800 mAh. "Namotorování" We recommend overdoing it - it's a park-flyer, not a rocket.