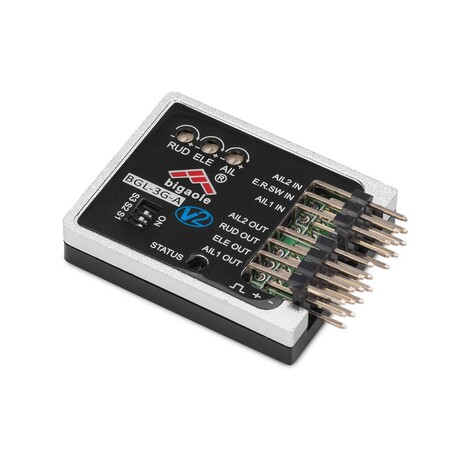 Miniature triaxial gyro stabilizer BGL-3G A-V2 Dual Mode heading-hold gyro to stabilize the aircraft models with conventional airfoils, flying wing (Delta) and a V-tail, driven by an electric motor and an internal combustion engine. When properly adjusted, allows for increased stability and maneuverability of the model and make it less dependent on environmental influences. BGL-3G-A V2 will help "turn off the wind" and it will react to his sudden gusts much faster than you.

BGL-3G A-V2 is small and lightweight in a robust metal case also providing shielding electromagnetic interference. Make it easy kidnap and fairly small models, perfect for recreational gliders and motorized models with electric drive and combustion engine. Thanks to the high maximum angular velocity of up to 800 ° / s is well suited for aerobatics and 3D models. Built mixes for flying wing (delta) and models with V-tail it possible to control these types of models, even the most ordinary radio system, which has no mixes.

BGL-3G A-V2 can work with any radio system with analog and digital servos with standard 1.5 ms neutral; supports aileron control through two servos connected to the two receiver channels. Plugs supplied a set of cables between receiver and servos (1 or 2), elevator and rudder, a set of three DIP switches, you can choose the model type (normal / flying wing / butterfly tail) and start calibration / adjustment mode, which also sets sense gyro response for each axis. Three rotary trimmers can be adjusted rate gyro for optimum stabilization independently for all three axes. Additional input software allows you to remotely switch three modes of operation of the gyro using the three-position switch on the transmitter:

Gyro operating states are indicated by an LED indicator.