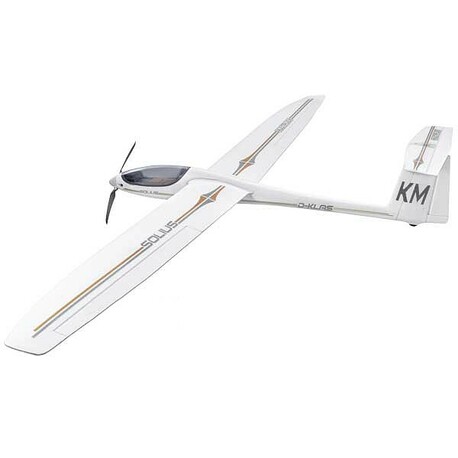 Solius builds on the proven aerodynamic concept Easy Glider, which adds to the elegance of modern gliders in 's-es-wéčkovém "style. At first glance slender hull with a transparent canopy with marked cockpit, tail in delight T arrangement enabling easy removal of the horizontal tail for transport. Wing with a wingspan of 2160 mm retains the thinness, thanks to a reasonable large bearing surface and thus guarantees excellent strength properties and good behavior at low speeds.

The fuselage is made of almost indestructible foam ELAPORu. The secret that allows you to have foam hull and slender, thin-walled tube is hexagonal aluminum alloy reinforcing fuselage from the wing on the tail. Tube are also listed extension cords servo rudder and elevator. The prow of the fuselage and the tail further strengthens few sticks glued laminated between the torso and the tail fin. Motor Permax BL-O 3516-0850 is mounted in the bow of the plastic engine bed. Included in the kit is a folding propeller blades 12x6. "Designers Multiplex have not forgotten the hull provide intake and exhaust vents provide cooling motor, controller and flight battery. The cabin area is saved 40 A brushless speed controller MULTICONT BL 40 S-BEC. Canopy with transparent "bubble" is removable, fixed with a pair of conventional plastic locks Multiplex. the bow will find ample space for the flight battery and receiver. Serva rudder and elevator are stored in kýlovce, rudder control short straight wire rods.

Wing model foamed ELAPORu is separate beams of rectangular tube of aluminum alloy whose protruding part serves as a coupling wings. Wing is secured in place sophisticated pin fitting into a lock on the root ribs - the pin is removed and retracts from the cabin. Aileron servos are installed in shafts with plastic covers, wings (along reinforced thin-walled tube of stainless steel) are operated independently of short straight wire rods.

The tail surfaces are also made of foam ELAPORU with reinforcements from fiberglass rods. Horizontal tail attaches to the top of the fin using two screws polyamide.

To serve the power Li-poly tříčlánek with a capacity of 2200 mAh or more capable of carrying at least 20C. Specific type select so that you without further adding of the most relied correct center of gravity.

To control model basically make do with even the most ordinary four-channel radio system, so you can use on-board equipment of your "olétaného" beginner RC set. The ideal, of course, use at least a five- or six-channel computer RC system enabling independent control of two mA aileron servos and their role in mixing the air brakes (both ailerons deflect up consistently).