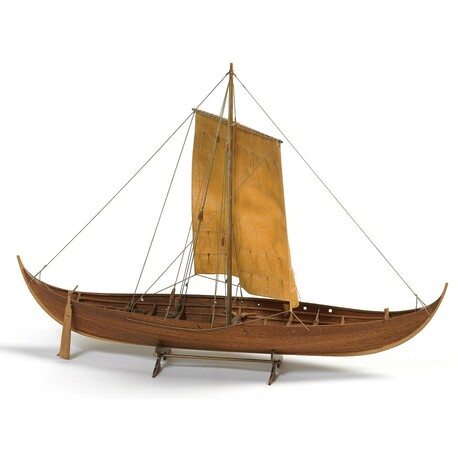 Roar Ege is an exact replica of a ship from the 11th century highlighted in 1962 from the bottom of the Gulf, which is the Danish port of Roskilde. At the same place they were found the wrecks of the other four vessels, all loaded with boulders, so apparently were deliberately sunk to block access to the port. The original ship was carefully restored and is now exhibited in a specially built hall in Roskilde. In the years 1982-1984 was built an exact replica called the Roar Ege with consistent use of indigenous technologies and materials - eg. planks for plating were cut by soaking, but were obtained by splitting trunks - respecting the natural wood structure yielded a material with higher strength and flexibility. The result was a beautiful boat with excellent nautical properties. The draft Roar Ege was a freighter able to carry 4-5 tons of cargo with a crew of 4-5 men needed to operate the sails and rudder. Apparently served the inhabitants of a large estate for transporting goods to market or coastal shipping in the waters around Denmark and the Baltic. Roar Ege is intended for experienced boat builders; It is designed as a non-floating table mockup.