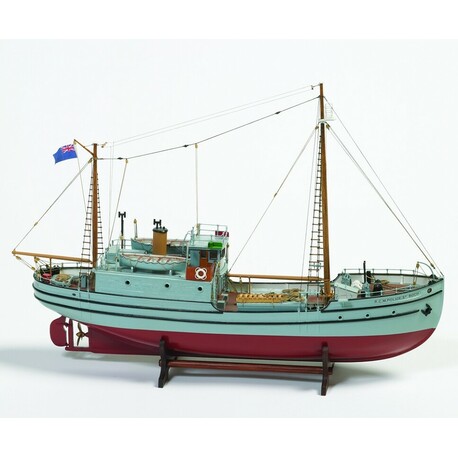 A detailed non-floating model of a Canadian Arctic research ship from 1928 with a wooden plank hull with a length of 470 mm from the Danish company Billing Boats. Kit in bulk in 1:72 scale for moderately advanced builders.

The supply ship of the Royal Canadian Mounted Police St. Roch sailed in 1940 from Vancouver on the Pacific coast to the exploratory voyage to the Arctic waters bathing the northern shores of Canada. Due to the heavy ice conditions had spent two winters frozen in ice before October 11, 1942, reached Halifax on the Atlantic coast. St. Roch thus became the first ship managed to sail through the Northwest passage from the Pacific to the Atlantic. In the summer of 1944, when the cruise did the opposite direction, he became the first vessel, which shattered the Northwest passage in both directions. A 1950 St. Roch became the first ship - even in stages - circumnavigate the whole of North America, as Halifax sailed through the Panama Canal to Vancouver.

St. Roch was built in 1928 in the shipyard Burrard Dry Dock Company in Vancouver; Now you can visit the Maritime Museum there. St. Roch is designed for intermediate boat builders; It is designed as a non-floating table mockup.