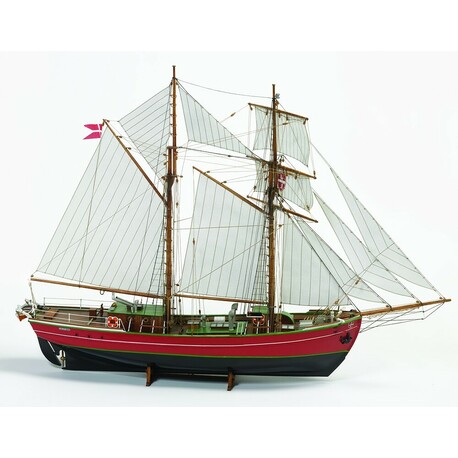 Lilla Dan schooner built in 1951 in the shipyard J. Ring Andersen in Svendborg, Denmark for the shipping company J. Lauritzen, who was using it as a training vessel for cadets training in their schools Kogtvedu. Sailboats with auxiliary engine built honestly mostly from oak and beech wood still serves as a cruise ship - and you can get it with the entire crew and you hire for your party in the Baltic. Lilla Dan is intended for advanced boat builders; It is designed as a non-floating table mockup.

Lilla Dan has a hull of a classic wooden structure made of laser-carved parts of the hull planking, wooden deck and superstructure. Kit includes all wooden, plastic and metal parts needed to complete the model, dummy accessories, sails etc.