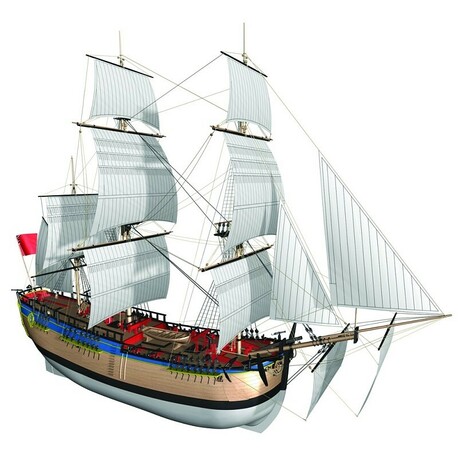 Future HMS Endeavour was launched in 1764 and served as a freighter for transporting coal under the name Earl of Pembroke. It was then purchased by the Royal Navy and adapted for the purposes of sailing around the world, which was in addition to exploring the main objective observations of the transit (transit) of Venus in Tahiti. It was an event of paramount importance while repeating twice in eight years, but then only after more than a century. Thanks to the method previously devised by astronomer Edmund Halley allow very accurately determine the distance between the Earth and the Sun, and hence the dimensions of the entire solar system. Transit in 1769 were preparing an expedition of scientists at various locations around the world to be able to make as many measurements regardless of the weather.

Under the command of Captain James Cook in August 1768 Endeavour sailed from Plymouth, Cape Horn and circumnavigate while sailing across the Pacific discovered a whole series of hitherto unknown islands. In Tahiti, the expedition was timely and in early June the planned astronomical observations and measurements during the transit of Venus. In September 1769 Endeavour docked at the shores of New Zealand, who circumnavigated the whole and comprehensively mapped. In doing so, he discovered the strait between the North and the South Island, which now bears the name of Cook. In April 1770 Endeavour sailed to the coast of Australia in Sydney today; Captain Cook stepped ashore in the Gulf, which for the wonderful wealth of plants named Botany bay (Botany Bay). The ship then sailed along the eastern Australian coast to the north. Narrowly escaped the fatal shipwreck on the Great Barrier Reef; Seven weeks after makeshift repairs on the beach, then hobbled to the Dutch Batavia (today Djakarta) on the island of Java. After a thorough repair of the local docks Endeavour continued its voyage to the west; in March 1771 he rounded the Cape of Good Hope and eventually docked in Dover, England July 12, 1771 after a nearly three-year voyage. While Captain Cook became one of the greatest explorers of all time, Endeavour returned to freight; For years, he sailed between England and the Falkland Islands and eventually the British in 1778 during the American War of Independence intentionally sunk as a blockade ship in the Gulf Narragansettském. HMS Endeavour is intended for advanced boat builders; It is designed as a non-floating table mockup. < / I>

HMS Endeavour has classic wooden hull structure made of laser-carved parts of the hull planking and a wooden deck. Kit includes all wooden, plastic and metal parts needed to complete the model, dummy accessories, sails etc.