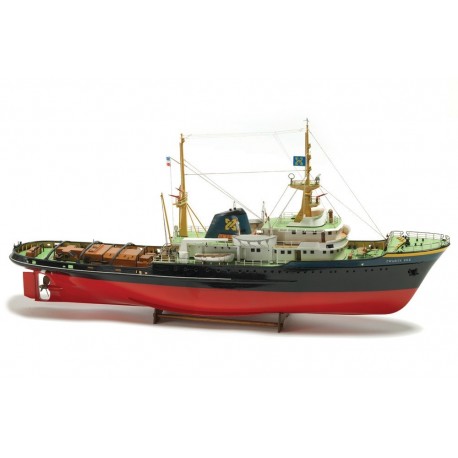 Detailed RC model of a Dutch tugboat with a length of 900 mm with a plastic hull from the Danish company Billing Boats. 1:90 scale building blocks in bulk.

Big Dutch ocean tugboat Zwarte Zee was launched in 1963. It has a very interesting drive - two turbo diesels of 9000 HP MAN can, thanks to an ingeniously designed gearboxes and clutches together racing boat speeds of 18 knots. But in situations requiring high maneuverability can either be used for forward and one for reverse, the changeover is virtually instantaneous. Kit in 1:90 scale is designed for moderately advanced ship builders.

Zwarte Zee has a body formed by plastic molding plywood with internal reinforcements, plywood deck and superstructure made of plywood and plastic parts. The kit includes a molded plastic hull and all other plastic and wooden parts needed to complete the model, dummy accessories (eg. Position lights, anchors, lifebuoys etc.), marine shaft sleeve and the propeller.

To drive model includes a DC motor range from 500 to 600, at least 30 A bidirectional controller (depending on engine) and 6-7 with articulated 2-3S NiMH or LiPo battery with a capacity of 3 to 5000 mAh.

For basic operation, in principle, sufficient even the most ordinary two-channel radio system; to control the rudder servo meet the current standard. But for right maketáře of course, is "duty" adding as much maketových functions (lights, sound module, water cannons etc.), which will require the use of multi-channel RC system - and the channel is never enough.