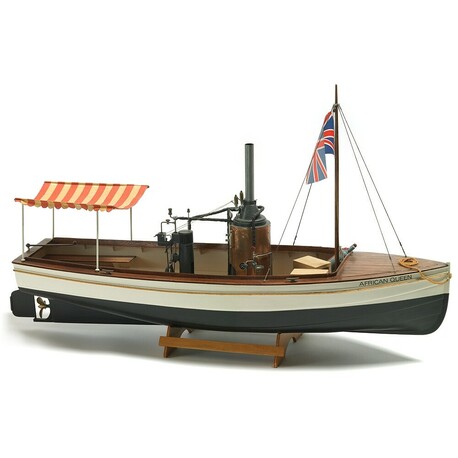 A sophisticated RC mock-up of a 740 mm steam motor boat with a plastic hull from the Danish company Billing Boats. Humphrey Bogart's Torpedo Boat and Katharine Hepburn's Movie of the same name

Film director John Huston's The African Queen (The African Queen) 1951 memorable with Katherine Hepburn in the role of a prim missionary Rose Morley and unique Huphrey Bogart as surly and whiskey přátelícím River steamboat captain Charlie Allnut rightly belongs among the gems of world cinema. It takes place in summer 1914 in the territory of German East Africa; After the outbreak of the First World War, the Germans burned the Methodist missionary Miss Morley, which causes Mr. Allnut go on an expedition along the river Ulanga to destroy a German gunboat defending the British to advance into the heart of the German colony. The third member was a steam boat African Queen, which our heroes equip homemade torpedoes, and Königin Luise after a series of entertaining escapades finally did sink. The ship, which featured in the movie "African Queen" was built sometime around 1910 and still cruising as a cruise vessel waters around Florida. Kit in 1:12 scale is designed for novice boat builders.

African Queen has a body formed by plastic molding with a wooden deck and a reinforcing structure. Under dummy boiler and machinery easily hidden on the drive motor with controller and battery. The kit includes all the plastic and wooden parts needed to complete the model, dummy accessories, marine shaft sleeve and the propeller.

To drive model includes a DC motor range from 380 to 400, at least 15-20 A bidirectional controller (depending on engine) and an articulated 6-7 NiMH or 2S LiPo battery with a capacity of 3 to 5000 mAh. Of course, you can also mount a real working steam engine.

For basic operation is sufficient even the most ordinary two-channel radio system; to control the rudder servo meet the current standard.