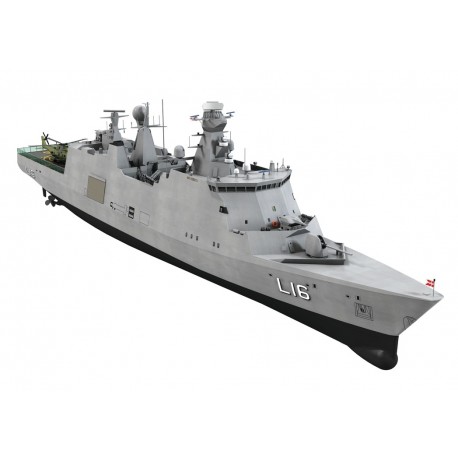 Absalon and Esben Snarr are two sister multipurpose modular Danish navy vessel. The hull of a frigate (fighting displacement of 6000 tons) allows you to carry a pair of helicopters EH-101 or MH-60 and armament typical for anti-submarine frigates. The modular solution has allowed in one day instead of containers with anti-aircraft missiles and protilodními load up a field hospital or a ship converted into minelayer with a capacity of up to 300 min, respectively. a transport vessel carrying up to 55 combat vehicles including tanks up to 7 classes Abrams or Leopard. Absalon has been deployed with great success in operations against Somali pirates, rescuing the whole range of ships attacked by pirates and his account accounts for 35% of the total number of captured pirates. Kit in 1:75 scale is designed for very advanced ship builders.

To drive the model includes two DC motors range from 500 to 600, at least 30 A bidirectional controllers (depending on engine) 6-7 NiMH or link steel 2-3S LiPo battery with a capacity of 3 to 5000 mAh.

For basic operation, in principle, sufficient even the most ordinary two-channel radio system; to control the rudder servo meet the current standard. But for right maketáře of course, is "duty" adding as much maketových functions (lights, sound module, water cannon, maneuvering unit etc.), which will require the use of multi-channel RC system - and the channel is never enough.