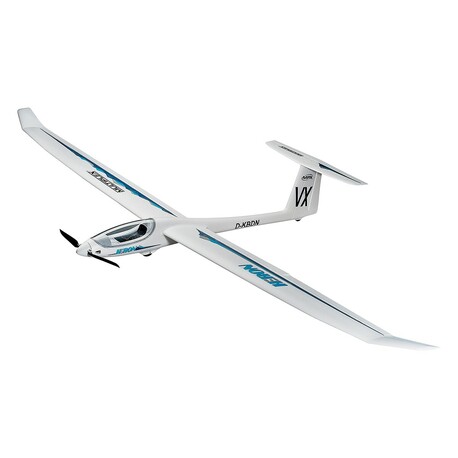 Since its first performance at the Nuremberg Toy Fair 2015 has been less than a month, still snow on the mountains melted, and now you can start the construction of gliders latest ELAPORu from Multiplex!

Heron is a younger brother of the popular gliders Solius - from him at first sight differs new wing of greater span of "mechanization" flaps and ailerons. At first glance slender hull with a transparent canopy with marked cockpit, tail in delight T arrangement enabling easy removal of the horizontal tail for transport. Wing with a wingspan of 2400 mm with an elegant winglets ensures excellent strength properties and good behavior at low speeds.

The fuselage is made of almost indestructible foam ELAPORu. The secret that allows you to have a foam body so slim, the hexagonal fiberglass reinforcement tube fuselage from the wing on the tail. Pipe appreciate even during model building - Now You might be able to build a torso twisted just really exerting too much effort! Tube are also listed extension cords servo rudder and elevator. The prow of the fuselage and the tail further strengthens several fiberglass rods vlepovaných between the torso and the tail fin. The engine is mounted in the nose of plastic motor mount with a universal pre- drilled holes and grooves for mounting screws - they should satisfy the vast majority of conventional AC motors adequate performance. Included in the kit is a spinner with grippers with collet for engines with 5 mm shaft and propeller blades 12x6. "If you decide to use a motor with a 4 mm shaft, purchase the appropriate spinner Multiplex # 73 3500. The model can also finish as" pure "glider - in the case is in the kit comes molded bow of ELAPORu ready for installation hook for aero tow. Canopy with transparent "bubble" is removable, fixed with a pair of conventional plastic locks Multiplex. The bow will find ample space for controller, drive battery and receiver. Servo rudder and elevator are stored in kýlovce, rudder control short straight wire rods.

Wing model foamed ELAPORu is separate beams of rectangular tube of aluminum alloy whose protruding part serves as a coupling wings. Wing is secured in place sophisticated pin fitting into a lock on the root ribs - the pin is removed and retracts from the cabin. For servos and flaps are prepared pit with plastic covers, ailerons and flaps (along reinforced thin-walled tube of stainless steel) are controlled independently by two servos with short straight wire rods.

The tail surfaces are also made of foam ELAPORU with reinforcements from fiberglass rods. Horizontal tail attaches to the top of the fin using two screws polyamide.

To drive the model, you'll need a brushless motor AXI class of 2814-2820 was 40-50 and regulators with switching BEC power stabilizer with Continuous carry at least 3 And to ensure reliable power for on-board electronics with 6 servos.

To serve the power Li-poly tříčlánek with a capacity of 2200 mAh or more capable of carrying at least 20C. Specific type select so that you without further adding of the most relied correct center of gravity.

To control model in distress make do with an ordinary six-channel computer radio system, but the ideal is, of course, use at least sedmikanálové computer RC system allowing independent control of the ailerons and flaps two mA servos, and mixing in the role butterfly brakes (both ailerons deflect consistently upwards and both flaps down) . And today knows how affordable Flash 7 or Cockpit SX!

Ready to match pits servos HS-55 / HS-5055MG (Nano-S) for the rudder and elevator and HS-81 / HS-82mg (Tiny-S) for the wings. Especially if you choose the drive system at AXI 2820, and you will want to fly more dynamically and on the slope, we recommend installing more powerful servo with metal gears.

Kit includes: moldings fuselage, wing and tail made of foam ELAPORu, transparent canopy, hexagonal fiberglass pipe and other reinforcements from fiberglass and stainless steel set of small parts and accessories, landing gear 45mm, folding propeller with a 55 mm cone with grippers with 5 mm collet and leaves 12x6 "sheet of stickers and instructions.