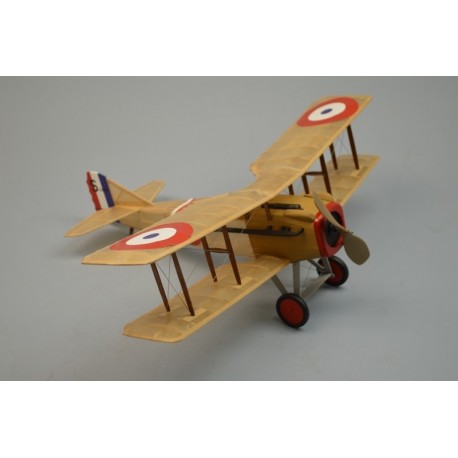 The first operational deployment of the new French fighter aircraft SPAD S.VII the autumn of 1916 was marked by problems with the engines Hispano-Suiza 8 and other "birth pains". But once reliably we managed to solve the cooling and ran a full scale production with a more powerful engine Hispano-Suiza 8AB falls in the following year became a very important means for balancing the current domination of the German Fokker and Albatross. Although SPAD were not as nimble as the Nieuport and had a weaker outfit than Albatross, their high speed and robust construction make them gained considerable popularity. The SPAD S.VII flew many of the top flying aces as Georges Guynemer was French or Italian Francesco Baracca. SPAD S.VII was also at the birth of the Czechoslovak Air Force, which received part gift and part bought 140 machines SPAD S.VII and S.XIII war surplus (share of both types is now impossible to determine, but S.VII were at least 50 pieces ). After France and the United States so we were the biggest users of the post-war aircraft. Only remaining piece restored in the form in which he served from 1919-1920, can be viewed at the Aviation Museum Kbely.

Designers of American companies DUMAS Aircraft is the ideal machine for modelers who already has at least basic experience in building small models powered by rubber (as a general model for the acquisition of basic experience with classical building is recommended to first build eg. One of the cabin wing aircraft from Guillow's or HERR) . You will improve in the building "žbrdličkové" skeleton of the fuselage and wings, paper coating and painting, preparation and curing the rubber volume zalétávání - just all those wonderful skills genuine classic modelařiny. While the building is not much they expect hundreds of hours in the workshop, thanks to a highly preprocessed laser-carved parts it goes like clockwork. < / P>

Designers freely flying semiscales French fighter aircraft designed for propulsion by rubber. The model is simple but classic balsa structure in Rozsyp with laser carved wooden parts, scale accessories made of vacuum-molded plastic parts and plastic drawn by injection molding. The hull is constructed normal minimaketářskou technology - the first of balsa wood strips assembling the sides, which connect polopřepážkami and bars in the lattice frame. The final round shapes get after sticking a large number of thin stringers. The wings are the classic design of the spars and ribs, tail out of balsa wood strips and laser-carved parts.

SPAD is also suitable for conversion to a miniature RC model with electric drive - although the construction plan does not offer this option for experienced modelers and the pilot would not be a big problem. For example, you can try to use the drive unit, and cabin electronics of miniature foam models Nine Eagles.