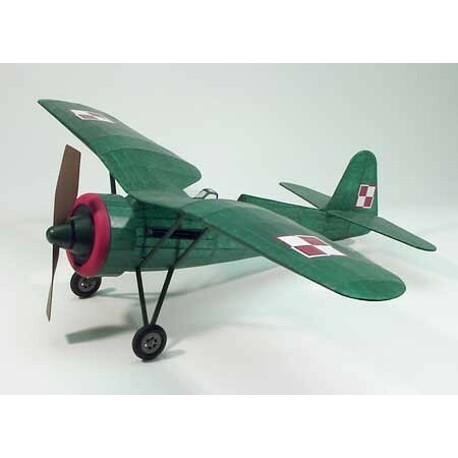 PZL P.11 fighters with magnificent "racčími" pointed wings are immortal symbol of the brave fight of the Polish Army against overwhelming German attack in September 1939. In a way, embody the pinnacle of pre-war "peace" machine - with a speed of just under 400 km / h, with weak weapons four rifle-caliber machine guns, armor cab without a self-locking covers tanks. Regardless of the ability of pilots and their bravery had to quickly bleed to death in a fight with the same quick-metal bomber ježícími with machine guns, a modern Messerschmitt Bf-109 cannon armament and at least 100 km / h higher speed not to mention. Yet P.11 achieved many successes - they must be managed surprisingly well against the lumbering twin-engine Messerschmittům Bf-110; It states that the P.11 shot down 110 German aircraft for the loss of 100 of its own machines ....

Designers of American companies DUMAS Aircraft is the ideal machine for modelers who already has at least basic experience in building small models powered by rubber (as a general model for the acquisition of basic experience with classical building is recommended to first build eg. One of the cabin wing aircraft from Guillow's or HERR) . You will improve in the building "žbrdličkové" skeleton of the fuselage and wings, paper coating and painting, preparation and curing the rubber volume zalétávání - just all those wonderful skills genuine classic modelařiny. Given the size and complexity of the master model is already quite a lot of construction, but due to high preprocessed laser-carved parts it goes like clockwork.

Designers freely semiscales Polish fighter flying high wing aircraft designed for propulsion by rubber. The model is a classic balsa structure in Rozsyp with laser carved wooden parts, scale accessories made of vacuum-molded plastic parts and plastic drawn by injection molding. The hull is constructed right minimaketářskou technology with dividers and plenty of stringers, which allow to faithfully reproduce the rounded shapes of modern machines. Built in two stages - thanks to "split" in the vertical plane stand directly on the countertop first half of the fuselage, and then to her "dolepíte" second half. This ensures that even complicated shapes hull stand straight and symmetrical, without needing any special preparations. The wing is a classic design from the spars and ribs, tail out of balsa wood strips and laser-carved parts.

P.11 is also suitable for conversion to RC model - is already large enough to support the fairly common for miniature RC servos 5-6 grams facilities. You can drive for an AC motor Class AXI 2204 or 2208, and two- or tříčlánek Li-Po 300 to 800 mAh