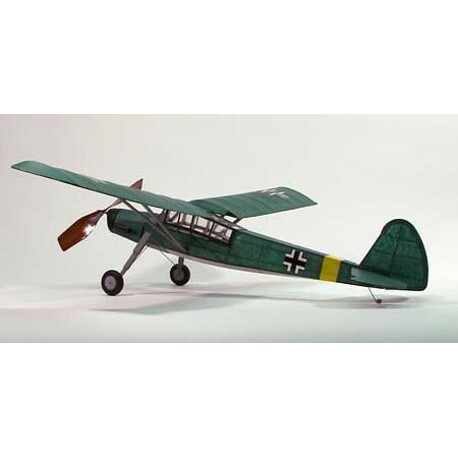 Reconnaissance and connecting wing aircraft with very short takeoff and landing Fieseler Fi-156 Storch is among the most famous airplanes of World War II. Unobtrusive and silent, able to land on the larger forest clearing has become the "eyes" of the German ground units in her most famous events "blitzkrieg". Storch is popular with senior commanders (such as Field Marshal Rommel), which allowed it to be in contact with the armor vrážejícími overwhelming wedges deep into the rear of enemy troops. On his account are also spectacular actions as a liberation of the Italian dictator Benito Mussolini from house arrest in a hotel on top of a mountain. Storch for the Luftwaffe were produced in factories in France and in our Chocen - indeed in production continued after the war, and particularly Storch French production of radial engines flying today.

Designers of American companies DUMAS Aircraft is the ideal machine for modelers who already has at least basic experience in building small models powered by rubber (as a general model for the acquisition of basic experience with classical building is recommended to first build eg. One of the cabin wing aircraft from Guillow's or HERR) . You will improve in the building "žbrdličkové" skeleton of the fuselage and wings, paper coating and painting, preparation and curing the rubber volume zalétávání - just all those wonderful skills genuine classic modelařiny. Given the size and complexity of the model draft is the construction a little more, but thanks to high preprocessed laser-carved parts it goes like clockwork.

Designers semiscales free-flying German reconnaissance and connecting high wing aircraft designed for propulsion by rubber. The model is simple but classic balsa structure in Rozsyp with laser carved wooden parts, scale accessories made of vacuum-molded plastic parts and plastic drawn by injection molding. The hull is constructed normal minimaketářskou technology - the first of balsa wood strips assembling the sides, which connect polopřepážkami and bars in the lattice frame. The final round shapes get after sticking a large number of thin stringers. The wing is a classic design from the spars and ribs, tail out of balsa wood strips and laser-carved parts.

Storch is also suitable for conversion to RC model - is already large enough to support the now fairly common for miniature RC equipment with 4-5 g servos. For propulsion, due to the thinness of the bow suitable small DC motor with gear in style powertrains GWS or small "outrunners" diameter to 20 mm and two cells Li-Po 300-500 mAh. Another good option is to use a motor and onboard electronics of the model Funtic.