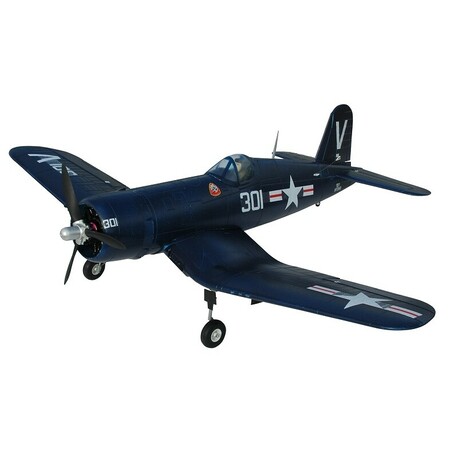 Kit containing an almost finished model of the F-4U Corsair aircraft from EPP with a span of 1430 mm with an AC motor with a regulator, equipped with servos and an electric retractable landing gear. Controlled ailerons, rudder, elevator, flaps can be added.

The Vought F-4U Corsair was the most powerful US WWII fighter. After solving the initial problems (too rigid chassis and poor view from the cabin complicating landing on aircraft carriers), along with Grummany Hellcat, the Japanese Air Force was swept away from the sky above the Pacific. The Corsairy successfully operated in the colors of the British Fleet Air Arm and from land-based aerodromes in the Marines. In the US Navy and Marines, he resisted until the 1950s when he played a significant role in the fighter bomber in capturing the initial onslaught of communist North Korea at the beginning of the Korean War.

Our new Corsair made of almost unbreakable extruded foamed polypropylene (EPP) shifts the limits of this technology. While hitherto common EPA half-masks with a range of about 1 meter or less are still available, our Corsair boasts a 1430 mm span! This is the size for which the 6.5 cc combustion engine was just the only acceptable drive - it's just a real adult fighter! The large dimensions, the attractive appearance of the "warbird", the good flying properties make the EPP Corsaira the role of an excellent model spiced with a moderate dose of war adrenaline for a pilot who reliably manages flying with a faster model with ailerons ...

The fuselage EPP model fuselage comes with a C4250-500 rotary casing (power output between AXI 2826 and 4120) mounted with a 50 A AC power switch with a powerful SBEC stabilized switch and rudder, elevator and spurs servos. Easy access to the on-board electronics and power accumulator ensures the removable cover of the cab with magnetic lock. For the model, you will need Li-poly four-cell batteries at least 2600 mAh with a 20C capacity, but "take" larger four-cell batteries 2500-4000 mAh, with which the flight time will be extended accordingly." The EPP tailpipe is fastened to the fuselage by polyamide screws. The wing is also made of foamed EPP with half-directional profile, two-piece, fixed to the fuselage with 4 bolts with clasps. Ailerons are controlled by two servos stored in the wing. They can also be used to control the exterior parts of the flaps (adult Corsair had three flaps in each half of the flap wing). Prior to attaching the rods, we recommend that the rudders "move" repeatedly with cautious upward and downward deflection, respectively. left and right. An electric retractable chassis with an electronic sequencer is fitted in the wing to ensure proper synchronized sliding and sliding of the chassis legs and closing and opening the chassis covers (it is controlled by the normal signal from the receiver as a servo). The spur is manageable, controlled by a special service that connects through the Y-cable to the rudder channel. Ailerons, rudder, elevator, engine speed and retractable chassis are controlled.

The model is supplied with a mock cone and four-leaf propeller 14x89 ".

WARNING: Inadvertent drawing of the instructions is incorrectly stated in the part of the printed instructions, the position of the center of gravity - this should be 90 mm behind the leading edge of the hull wing. We greatly apologize for this error" / b>