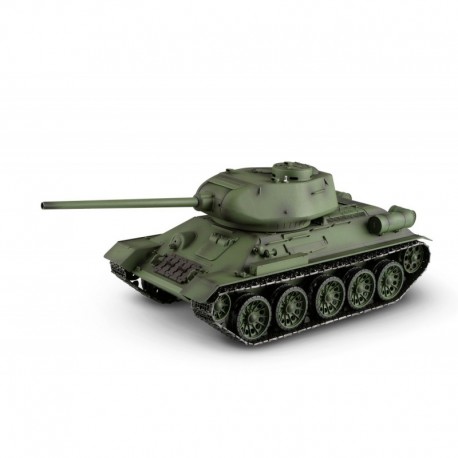 When the German army in 1941 headed east to conquer the Russian plains, it soon struck an unpleasant surprise in the form of massive medium-sized T-34 and heavy KV-1 tanks that did not match any of the Wehrmacht's "Panzer". But the mechanical deficiencies of the new Russian tanks, the poor training of their crews, the desperate supply of fuel and ammunition, the almost nonexistent field workshops, and mainly the incompetence of the command corps demolished by previous Stalinist extermination purges and stereotypically repeated mass attacks against the prepared German defense conducted without prior exploration, artillery or aviation have caused the German invasion to end before it began. But the German reaction was fast, and in 1942 the original T-34 with a 76 mm cannon was enough for the new "Panzers" to suffice. The T-34 returned to the position of the "first" between the middle tanks (shared with the German Panther), after having been given a new tower with a high-performance 85 mm ZiS gun capable of snapping the front armor of the still invulnerable Tiger up to a distance of 500 m. and only a two-man tower crew with a desperately overloaded commander was a major drawback in the fight (Panthers had 2 men-the charger and shooter who was aiming and firing, giving the tanker more time to search for targets and maintain a general overview of the battlefield) , but the mass of T-34/85 was ultimately decisive. T-34/85 after the war were also produced in Czechoslovakia; for the tank battalions of our army and other countries of the Eastern Bloc, 3185 pieces were built.

T-34/85 was the Soviet central tank on the chassis according to the American Christie system; characterized by the consistent use of sloping armor panels on the skeleton and the tower, which increased the resistance to the shot. He was powered by a twelve-inch twin-engined diesel engine in the "V" 500 horsepower. The armament of the tank consisted of a 85 mm ZiS-S-53 with a long main and high muzzle velocity and two machine guns - one in a swinging loupe on the right side of the hull and the other coupled with a cannon. More details about the actual tank: http://cs.wikipedia.org/wiki/T-34

And this legend now goes to our model battlefield as a fully functional model at 1:16 scale!

The electric-powered T-34/85 RC model faithfully performs most of the actual tank functions. It is equipped with a realistic chassis with functional belts, drive, travel and tension wheels that allow for both forward and reverse travel, left and right turns forwards and backwards. There is a pure tank-like "spin-off" - rotation on the spot with counter-motion of the belts. Remote control of the turn of the tower (at 320o) and the cannon (trigger and lifting barrel) is controlled remotely. Not only that - the model really shoots! Its cannon is not just an imitation but it's an air-soft air gun and automatic charging a 6 mm plastic BB ball. "Ammo" is stored in a stack in the tower; thanks to the system of giving the projectiles additional rotation, which helps to limit the impact of the Earth's gravity on the missile's track, cannons are up to 25 m. For shooting training the model is supplied with a paper target with a stand.

Simulation of the actual tank does not end there, the audio module (with adjustable volume) imitates the sound of the engine, machine gun and cannon shooting. The shot from the cannon can be accompanied by a backlash simulation of the "backward" model. Realism of "expression" further increases the smoke generator, which complements the sense of smell.

To control the model is a transmitter with two cross controllers (left controls tower rotation, cannon and gun shooting, right controls the forward, reverse, and side movements of the tank). The buttons on the transmitter are used to initiate the engine start simulation, machine gun sound imitation, cannon gun sound, switch on the smoke generator and adjust the volume of the sound effects of the model. The RC model controlling model operates in the 2.4GHz band, allowing simultaneous operation of multiple tanks at the same time.

The transmitter is powered by six AA batteries or accumulators (not included), powered by a 7.4V 1800 mAh twin-cell lithium-ion kit supplied with the model along with a mains charger.

Handling the air-soft weapon tank (Category D firearm in accordance with Act No. 119/2002 Coll. On firearms and ammunition) requires special caution and strict adherence to all principles for its use.