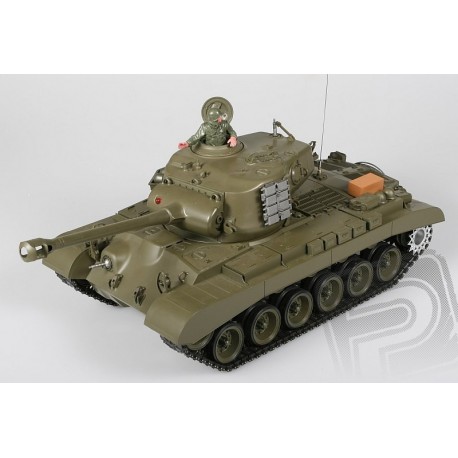 Semi-coupe of the American M26 medium-size tank from the end of World War II with electric drive. With air-soft cannon, WITHOUT smoke and sound effects, RC set 27 MHz.

DETAIL OF STORES
Other options and terms
In store: 2 pcs
Stores and delivery dates

M26 Pershing (named after the commander of the US Expeditionary Corps, who fought in World War I, General Pershing) in France, came into service only in the last days of the Second World War and was the first American tank to successfully confront the German Tigers and Panthers. Armed with a 90 mm cannon and 2-3 machine guns (one Browning 7.62 mm in front of the hull, the other coupled with a cannon and the third - this time Browning 12.7 mm - on the tower). The weight of the tank slightly exceeded 40 tons, with the Ford engine powered by the 30-ton Sherman with difficulty, so the maximum speed did not exceed 40 km / h on the road. The M26 Pershing tanks, along with the more modern M46 Patton (M26 with a stronger engine), were the base of the United Nations armored forces in the Korean War and were the only American tanks that could successfully fight the North Korean T-34/85 (the best tanks on the battlefield were, of course, British Centurion) . More details about the actual tank: http://en.wikipedia.org/wiki/M26_Pershing

And this legend now goes to our model battlefield as a fully functional model at 1:16 scale!

The Snow Leopard electric-powered RC model faithfully performs most of the actual tank functions. It is equipped with a realistic chassis with functional belts, drive, travel and tension wheels that allow for both forward and reverse travel, left and right turns forwards and backwards. There is a pure tank-like "spin-off" - rotation on the spot with counter-motion of the belts. Remote control of the turn of the tower (at 320o) and the cannon (trigger and lifting barrel) is controlled remotely. Not only that - the model really shoots! Its cannon is not just an imitation but it's an air-soft air gun and automatic charging a 6 mm plastic BB ball. "Ammo" is stored in a stack in the tower; thanks to the system of giving the projectiles additional rotation, which helps to limit the impact of the Earth's gravity on the missile's track, cannons are up to 25 m. For shooting training the model is supplied with a paper target with a stand.

The transmitter supplied with the model does not only allow direct control in the "real-time" model, but has six demo programs that allow the automatic operation of the tank. In addition, you can program your own "set" and organize friends with "tank spartakiáda" or compete in slalom passage according to a preset program. The controls are controlled by two crosscuts (the left hand controls the tower rotation, the cannon and the gun, the right controls the forward, reverse, and lateral movement of the tank). Three buttons on the transmitter are used to run demo programs or to program your own "assembly".

The RC model controlling model operates in the 27 MHz band, the transmitter and receiver in the model are equipped with a three-position switch enabling switching of three operating channels, allowing simultaneous operation of multiple tanks at the same time.

The transmitter is powered by eight AA batteries or batteries (not included). The model is powered by the standard 6.2 V 1800 mAh six-cell kit (sub-C cells, as for RC models 1:10 models) supplied with the model along with the network charger.

Attention! Special warnings! The handling of air-soft weapons requires special caution and strict adherence to all principles for their use / b>