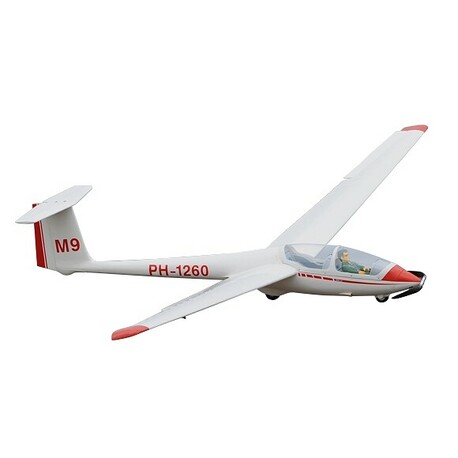 Three-meter "Ah-Es-Káčko" from the production of Phoenix is designed especially for aero-tow and thermal flying. Its design also allows for the installation of engines brushless motor AXI 2826 class with a folding propeller in the bow model.

The fuselage consists of lightweight plywood partitions with solid celobalsovým coating coated iron-on transfers Oracover. Access to the on-board electronics provides a removable canopy under a clear "bubble" containing mock dashboards, seats and steering levers, for which you can establish a pilot who obviously missing in the kit. The bow can install the supplied motor mount, which can mount an electric motor (extension shaft engines with 5 mm shaft is also included in the kit).

Two-piece wing is pushed to the side of the two clutches of the dural tube is a classic design with torsion box with balsa solid coating and coated iron sheets Oracover. Ailerons are controlled by a pair of servos with short straight rods; realistically thick airfoil (the series HQ) with an arched middle curve gives enough space for conventional micro servos. Wing is ready for installation of electrically operated air brakes system Schempp-Hirth of 450 mm.

The landing gear is formed by two half unsprung wheels projecting from the contour of the fuselage.

Motorization model: ASK 21 can power an engine mounted in the front fuselage folding propeller on bare stringer without cone - such a solution is almost invisible, whether the engine is running or not. Ensure sufficient power brushless motor AXI 2826 class-powered 4S LiPo battery 2600-3300 mAh.