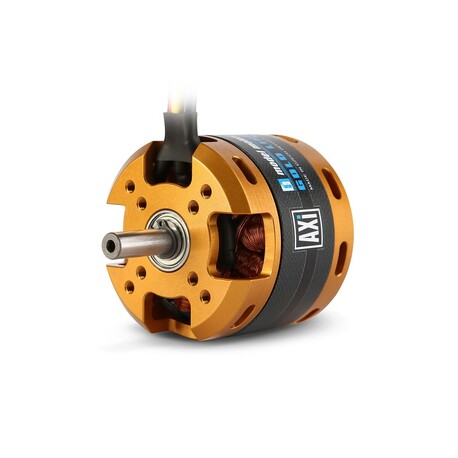 The new generation of AXI 5320 / xx V2 has higher performance thanks to its sophisticated design, which in conjunction with an integrated cooling system based on the principle of a turbine effect airflow keeps the motor windings cooler by up to 20%.

Robust and reliable high-performance brushless motors AXI 5320 / xx V2 with rotating drum and neodymium magnets have a hardened steel shaft with a diameter of 8 mm mounted in three ball bearings, which ensure very good mechanical stability under normal and inverted mounting and allows high dynamic loads common in aerobatic flying and ensuring a very high durability. Rotors AXI 5320 / xx V2 are exported to most modern dynamic balancing equipment from a reputable company Schenck. High-quality Japanese bearings supplied to the engines of the V2 is characterized by higher durability and quiet operation.

AXI 5320 / xx V2, thanks to its great to torque suitable for large propellers without the need for a gearbox, which ensures high efficiency of the entire drive.

AXI 5320/18 V2 is a big brushless motor learned to drive models with a flying weight of up to 7000 g with power from šestičlánkového Li-poly battery. Perfect for electrification models designed to drive 15 to 20 cc two-stroke engine (resp., And four-stroke petrol engines of 20 to 30 cc).

Motor mounting: AXI 5320/18 V2 is designed for front and rear mounting. When mounted behind the front face of the engine using at least four M4 bolts which extend into the head of the motor in the range of 5-6 mm. Motor bulkhead should be from 8-10 mm aeronautical plywood.