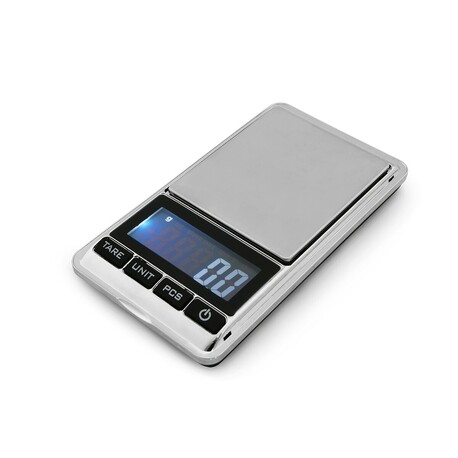 Pocket digital scale with weighing up to 1000 g and 0.1 g resolution for weighing smaller models, mixing more epoxy for bonding and laminating other multi-component adhesives and paints.

Handheld digital scales with weighing range of 1000 g with backlit LCD display are a great help in the modeling workshop and household generally. Serve weighing smaller models, selection and sorting of balsa and similar construction materials when mixing epoxy resins and other multi-component adhesives and paints, weighing domestic reserves of gold, platinum and diamonds and many other useful activities.

Scales are delivered with leatherette casing and removable plastic cover that can also serve as a weighing pan. For power is a pair of AAA mikrotužkových batteries (not included).

Taring: With tare can eg. Subtract the weight of the empty container and weigh so only the content itself.

Counting: After weighing the sample containing 25, 50, 75 or 100 pieces numbered objects scales can switch to the counting mode. Due to the resolution 0.1 g will be sufficiently accurate for counting objects weighing over 0.3 g.

Calibration: If the scale weighs inaccurately (eg. Due to large temperature changes, after a long period of use, etc.) May be required to calibrate. To calibrate you need accurate (calibrated) A weight of 1000 g - the rest will arrange a special calibration function. < / P>