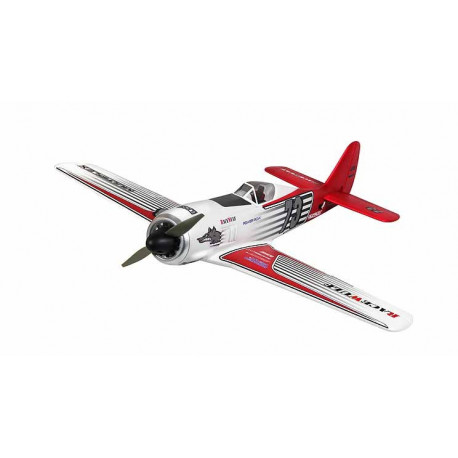 In order for the "mustang" FunRacer not to be alone in the sky, and to have someone to deal with, the Multiplex designed the new RaceWulf inspired by the twary fighters Focke-Wulf FW-190. Like its FunRacer, it's a damn fast and agile glider made of an almost indestructible ELAPOR and uses the same engine, propeller and regulator. With the elegance and aggressive appearance of a thoroughbred for races around pylons and souls of a fighter from II. World War II will offer you a blunt dose of pure and undiluted adrenaline!

Low minimum speed, amazing maximum speed, great in-flight behavior over a wide range of speeds with precise and fast steering response for wild acrobatics ... all in conjunction with the extremely durable kite made of foam ELAPOR. The operation of the model is facilitated by a number of "tweaks" - from the removable cab cover for lightning-fast refueling, sorry, battery replacement, to the removable wing for easy transport. And you'll be ready for your first RaceWulf flight in a quarter of an hour!

The tail surfaces are also from Elapor; rudder and elevator servos are located in the tail of the fuselage, the rudders are controlled by short straight wire rods.

The sash with a semi-symmetrical profile made of ELAPOR foam with carbon reinforcements is one-piece; it is attached to the fuselage with two polyamide screws. The ailerons are controlled by two servos mounted in the wing; The MS-12020 MG microservice is, of course, already built-in.

RaceWulf - as is usual with combat models - has no chassis, starts from the hand and lands "on the stomach" in the grass.

The model is delivered with a finished surface finish in orange-white combination with stickers.

To control the model, you will need at least a four-channel RC kit, ideally, of course, the use of at least a five-channel computer RC kit, which allows independent control of aileron servos, precise adjustment of the amount of deflection, programming of double deflections or. exponential course of deflections to reduce the sensitivity of the rudders around neutral allowing very precise control while maintaining large maximum deflections.

Pursuant to Commission Delegated Regulation (EU) 2019/945 of 12 March 2019 on unmanned systems and unmanned system operators from third countries and Commission Implementing Regulation (EU) 2019/947 of 24 May 2019 on the rules and procedures for operations Unmanned aircraft operators and pilots of unmanned aerial vehicles (classic aircraft models, multicopters, drones) that weigh more than 250 g or carry a camera or other sensor capable of capturing personal data in any way are required to register (in the Czech Republic with the Civil Aviation Authority) . More information can be found here: Registration of operators and pilots of drones